Get fresh music recommendations delivered to your inbox every Friday.
We've updated our Terms of Use. You can review the changes here.

Requiems of The Ignominious

by Cesspool of Corruption 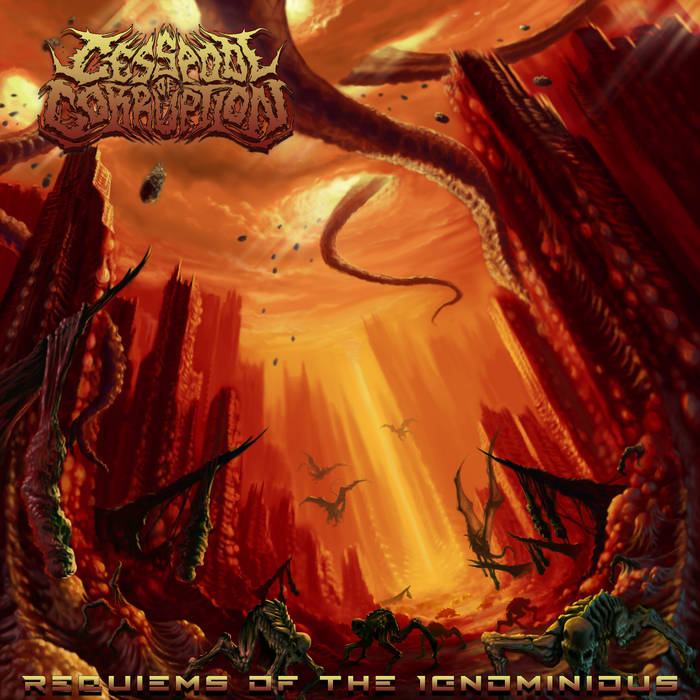 Lars Gotrich When a rippin’ and groovin’ death metal debut has this much dynamic (several vocal styles, contrasting melody/dissonance) and presence (well-pronounced bass and drum production), I take notice. Cesspool of Corruption’s melodic tech-death doesn’t get itself (too) twisted in knots, but knows the nuts and bolts of brutality. www.vikingschoice.org/archive/vikings-choice-guide-to-bandcamp-friday-aug-2021/ Favorite track: Insidious Inheritance.

Texas Melo-Tech Force, Cesspool of Corruption, return with their highly anticipated full-length album, ‘Requiems of the Ignominious’. The album comes 5 years after the bands self-released EP, ‘Eradication of the Subservient’ (which was officially reissued in 2020). ‘Requiems…’ showcases a further refined and progressive sound, that Cesspool of Corruption likes to consider identifiable to their musical offering.

Reviews:
"This is violent, aggressive and ferocious noise that will have all fans of extreme salivating." - GBHBL
www.gbhbl.com/album-review-cesspool-of-corruption-requiems-of-the-ignominious-gore-house-productions

"Requiems Of The Ignominious scratches to be the most persistent, technical and melodically driven extreme metal albums of 2021..." 9/10 - Metal Purgatory
metalpurgatorymedia.com/2021/08/16/cesspool-of-corruption-requiems-of-the-ignominious

"Cesspool of Corruption’s melodic tech-death doesn’t get itself (too) twisted in knots, but knows the nuts and bolts of brutality." - Vikings Choice
www.vikingschoice.org/archive/vikings-choice-guide-to-bandcamp-friday-aug-2021/

Bandcamp Daily  your guide to the world of Bandcamp

Frayle's Gwyn Strang and Sean Bilovecky join the show to talk about their cathartic new album.